We recently published a list of supplements that are beneficial to maintain heart health. In this blog, we decided to focus on one of the lesser known nutrients, coenzyme Q10, that we mentioned there. 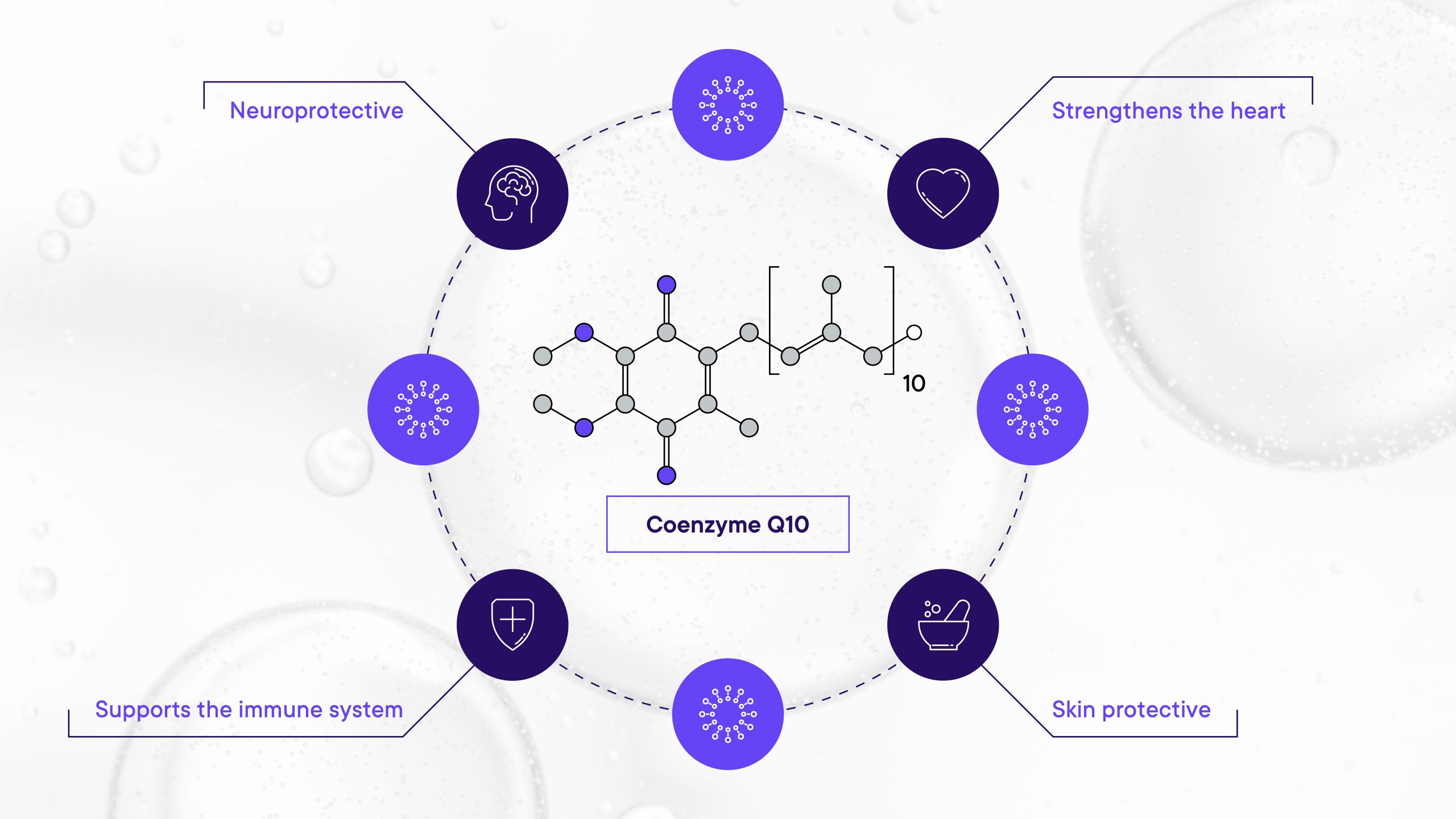 Although first identified in the late 1950s, coenzyme Q10 is not an oft heard-of nutrient. In fact, most people probably don’t even know that they might need to start CoQ10 supplementation as early as in their twenties (1).

We want to set the record straight with this blog post that hopes to inform you of all that you need to know about this super coenzyme and why its liposomal supplementation is recommended.

What is a coenzyme?

An enzyme is an important catalyst for a biochemical reaction (2). For example, the food that you eat is broken down into several nutrients, including glucose or energy, through a series of biochemical reactions. These reactions can only be carried out with the help of specialized proteins called enzymes.

A coenzyme is a molecule that helps an enzyme carry out its function. Not all enzymes require coenzymes. Those that do, however, cannot function without their coenzymes. Coenzymes are thus biologically important.

What is coenzyme Q10?

Coenzyme Q10 is a naturally and ubiquitously found coenzyme. Specifically, it is located in the mitochondria of our cells. Here, it helps energy-producing enzymes to extract energy from the food that we eat.

The Q in coenzyme Q10 stands for “quinone”, which is a class of aromatic organic compounds. The quinone forms the basis of CoQ10’s chemical structure. The 10 stands for the number of chemical subunits found on its tail (3).

What does CoQ10 do in the body?

The highest levels of coenzyme Q10 are found in the heart, liver, kidneys, and pancreas (4). Apart from its role in energy production in these metabolically active organs, it also acts as an antioxidant. An antioxidant, as we all know, helps neutralize free radicals that can harm our cells (5). CoQ10 may also have immunostimulatory or immune-enhancing effects.

Apart from these main functions, coenzyme Q10 also plays a role in cell growth and death (6).

Although coenzyme Q10 is naturally found in the body, its levels decrease with age and certain chronic conditions like many different types of cancer, hypertension and heart diseases (7).

CoQ10 and the heart

The heart is one of the most active muscles of the human body. It needs a lot of energy for its constant pumping action. Coenzyme Q10 plays a crucial role in the synthesis of this energy. Being such an important cofactor in energy generation, CoQ10 supplementation has recently been studied in energy deprived states such as in congestive heart failure (8).

Apart from its energy-producing functions, CoQ10 is an antioxidant, has a positive influence on myocardial enzyme activity, has a protective effect on endothelial cells, and anti-viscosity effects (6). Thus, CoQ10 displays a wide range of interesting properties for the treatment of cardiovascular diseases.

Some human clinical studies have shown that long-term CoQ10 supplementation in patients with chronic heart failure is safe, improves symptoms, and reduces major adverse cardiovascular events (6) (8). However, there is still no conclusive evidence of the effect of CoQ10 supplementation on lowering blood pressure.

CoQ10 and the nervous system

The progressive loss of neuronal function, electrical activity, and structure in the central nervous system (CNS) is known as neurodegeneration. Neurodegeneration is the main feature of acute and chronic neurodegenerative diseases such as Alzheimer’s disease, Parkinson’s disease or multiple sclerosis (6). The most common triggers of neurodegeneration are neuroinflammation, oxidative stress, mitochondrial dysfunction, protein aggregation and misfolding, cell death, and the loss of cell growth factors.

Coenzyme Q10 has the ability to maintain the mitochondrial membrane potential while supporting energy synthesis and inhibiting reactive oxygen species’ generation. Thus, it has proven to be an invaluable therapeutic tool for the protection of neuronal cells in neurodegenerative conditions (6). CoQ10’s ability to prevent the production of pro-inflammatory molecules is another aspect of its neuroprotective potential.

Diabetes mellitus, or type 2 diabetes, is a metabolic disease caused by the insufficient production or absorption of insulin. Insulin is a hormone that is responsible for the uptake of glucose from the blood by the other organs of the body. Thus, when there is not enough insulin, there is consequently excess blood glucose, leading to diabetes.

Diabetes-related complications such as loss of vision (diabetic retinopathy) or diabetic cardiovascular disease are mainly caused due to a generation of free radicals. CoQ10 has been proposed as an antioxidant treatment in these cases (6). In animal models of insulin resistance, CoQ10 biosynthesis has been shown to be impaired. For this reason, CoQ10 supplementation has received a lot of attention for its possible therapeutic application.

Our skin is exposed to pollution and the harmful UVB rays of the sun on a daily basis. These exposures are known to cause skin damage through the development of free radicals and/or inflammation. Coenzyme Q10 with its cytoprotective properties, has been proposed as a highly promising strategy to maintain skin health (6).

It is well known that one of the first organs that lose visible function with ageing is the reproductive system. Further, lifestyle activities such as smoking and unhealthy diets have led to a worldwide loss of reproductive quality by as much as 50% in some cases (9). The reactive oxygen species that are produced in the human reproductive organs due to the outlined reasons causes DNA damage and cell death. Therefore, male sperm and female oocytes quality are affected due to repeated oxidative damage.

Coenzyme Q10 supplementation has been proposed to ameliorate the effects of ageing and lifestyle changes to our reproductive health (9) (10).

CoQ10 is crucial for the proper functioning of any cell type. Its reduced synthesis or absence, therefore, has severe consequences. As outlined in the previous section, an imbalance of CoQ10 can lead to several diseases. Deficiencies of other nutrients such as a vitamin B6 deficiency can also lead to a CoQ10 deficiency (1). Supplementation may be necessary as the body is incapable of producing CoQ10 by itself in such conditions.

As mentioned earlier, the highest levels of CoQ10 are found in the heart, liver, kidneys, and pancreas (4). Therefore, animal organ meat is one of the richest natural sources of CoQ10. Depending on the source, organ meat could contain a maximum of about 11 mg of CoQ10 per 100 g of meat (1).

Non-meat alternatives include soybean products, nuts & seeds and vegetables such as broccoli. However, only a maximum of 2-3 mg of CoQ10 per 100 g of these products can be found (1).

In Japan, CoQ10 was approved as treatment for heart failure in 1974 (11). Pursuant with getting USFDA and EU approval, several clinical trials are ongoing to determine the efficacy of coenzyme Q10 supplementation. For example, CoQ10 administration in the treatment of Parkinson’s disease, chronic fatigue, renal failure, cardiomyopathy and cardiac arrest, are being studied (3).

Although CoQ10 is not yet approved for clinical use, it has been sold as a food supplement for several decades now due to its host of health benefits. Doses of CoQ10 in supplements for adults range from 30 to 100 mg/day (12). These doses are known to increase blood and lipoprotein concentrations of coenzyme Q10 in humans.

Although coenzyme Q10 has been administered orally so far, its effectivity is low since its intestinal absorption is poor (6). In fact, studies in rats demonstrated that only approximately 3% of orally administered CoQ10 can be absorbed. However, since the acceptable daily intake of CoQ10 has been set at 12 mg/kg/day, increasing the concentration of the oral supplement is not an acceptable solution (6). CoQ10’s uptake is also compromised due to its poor water solubility and instability to light and heat.

One alternative to increase the bioavailability of CoQ10 supplements is therefore, liposomal encapsulation. By being encapsulated in a water-soluble liposome, CoQ10 can circulate for longer in the body. This in turn, will increase its stability and prolong its circulating half-life (6). The longer that CoQ10 is circulating in the body, more of it can be absorbed. Thus, liposomal delivery of CoQ10 can increase its bioavailability.

Read more about liposomes and bioavailability on our website or blog.

There have been no reports of significant adverse side effects of oral coenzyme Q10 supplementation at doses as high as 3 000 mg/day for up to eight months, 1 200 mg/day for up to 16 months, and 600 mg/day for up to 30 months (12). However, the acceptable daily intake of CoQ10 has been set at 12 mg/kg/day to avoid possible side-effects such as nausea, diarrhea, appetite suppression, heartburn, and abdominal discomfort, especially with daily doses ≥200 mg.

Currently, Europe, Russia, the USA, and Japan make up 85% of the total global consumption of CoQ10 supplementation. In 1982, it became one of the top five medications used in Japan (11).